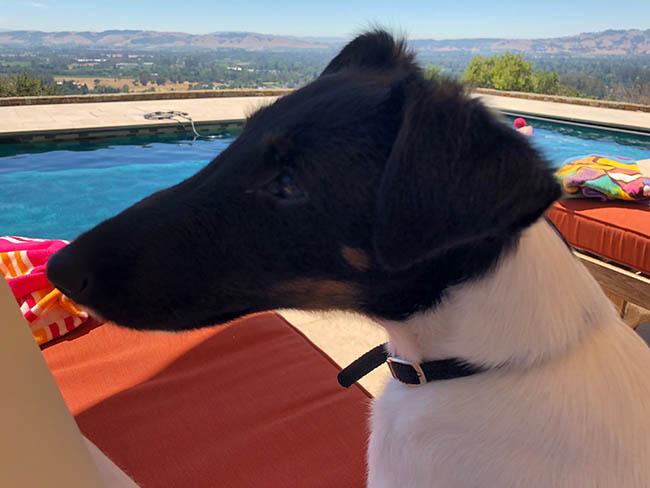 I’ve been meaning to write a post about how wonderful our new puppy, Justin Timberlake, is. I know you aren’t suppose to call one of your dogs your best dog ever, but in a few short weeks, little Justin became that for me. And I’ve had some incredible terriers. My Charlie and Oscar were multipurpose clowns, performing for everyone. Lucy was all about the men. She was a sweet terrier, but she’d leave my side in a minute if a man walked in the room. Little Sally is a supermodel, but perhaps a Heidi Klum because she has brains as well as beauty. She uses both to wrap everyone around her paw. But little Justin: although everyone who meets him falls in love with him, seems to think his one goal in life is to constantly show me that he loves me best. He’s absolutely glued to my side at every moment. If he feels too much time has elapsed between cuddles, he’ll beg to be picked up so he can give puppy kisses. Every day I sat down to write a blog post about how wonderful he was, he’d do something even more wonderful that would surpass the superlatives I was going to write about. 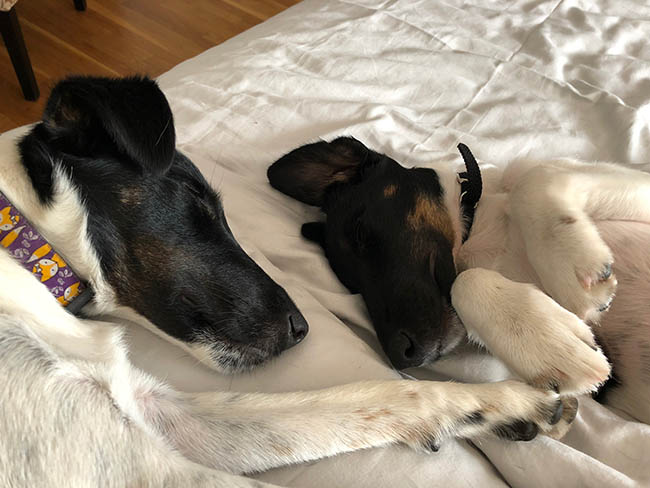 But instead, due to what seems to be the ingestion of a virulent toxin, Justin is in the ICU and I am looking at some scary choices. The timeline was swift and scary. He ate a good dinner Saturday night, did a normal poo at 10PM, woke up at 4AM and vomited, had explosive diarrhea at 6AM. Ate breakfast and seemed back to normal. At noon he had sudden violent bloody diarrhea and in ten minutes he was in the car and headed for the emergency vet. Their tests showed acute and rapidly deteriorating liver failure. Within hours he was on IVs to boost his blood glucose, detox and clean his liver and bile ducts, replace his electrolytes, address his clotting problems and keep him stable. As Sunday wore on, he got worse or showed no improvement. The next day, the vet was already saying that I had to be prepared that he would not recover. 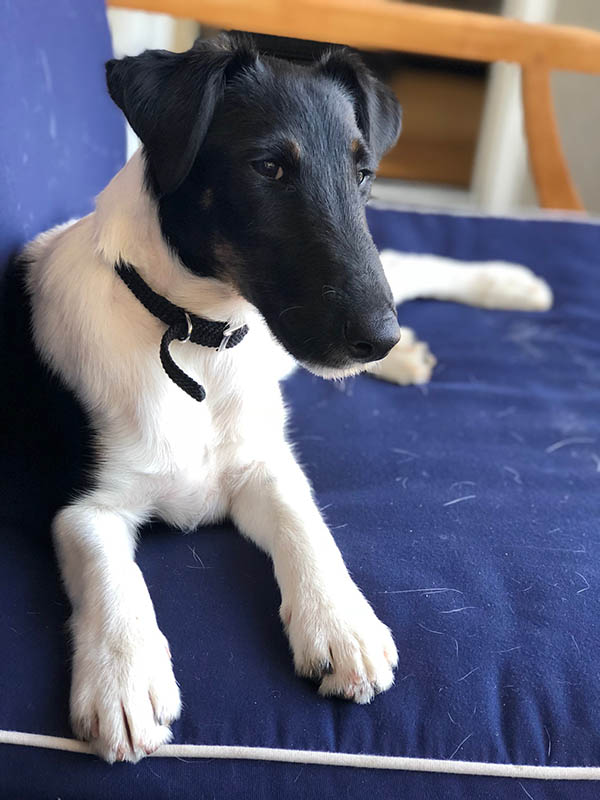 I am only posting pictures of Justin at the peak of health.

She suspected poisoning by Death Cap mushroom which has more than a 70% fatality rate. I question that supposition as mushrooms need damp conditions and we are hot as blazes up here and we aren’t creating moist microclimates by irrigating or by planting non-Native species that invite invasive species like the Death Cap — although this mushroom has scarily adapted to Pacific oak forests. I’m still doing the research, but I would bet the oaks it attaches to — at least in summer — are oaks in the cool misty forests of the Santa Cruz Mountains or the Pacific Northwest. However, the vet says he’s showing the classic symptoms and they are seeing a lot of it. The vet assured me that, regardless of what the cause is, the protocol for treatment would be the same. They have to address the sudden and severe liver failure. However, for me, knowing the exact cause is critical because I want to address it and eradicate it so no dog is ever exposed to it again up here.

There are dozens of things that cause liver toxicity in dogs, but we’ve eliminated most. We keep no automotive chemicals near the house. They are locked in a cement bunker way down by the barn, mostly for fire prevention. All household cleaning supplies are in cabinets in a laundry room that is always closed. There has been no chocolate lying around. We do have grapes, but those attack the kidneys in dogs. And every winery in Napa and Sonoma has multiple dogs and no one loses them to grape poisoning. It may be because wine grapes are small and somewhat bitter, unlike big juicy irrigated table grapes. A toxic form of blue green algae has been mentioned, but the dogs have not been down to our pond. Justin did slurp some water from a fountain in the yard, but I’ve never seen algae in it. I might take some water and see if I can have it tested.

I took a urine sample to UC Davis where they said they could expedite testing that would confirm or rule out Death Cap mushroom or its relatives. But if it’s not Death Cap, it won’t tell me what it is. Some people have questioned whether he had a recent vaccine, but he only had his booster of a shot he’s had twice before from a vet who has vaccinated all my dogs before him. 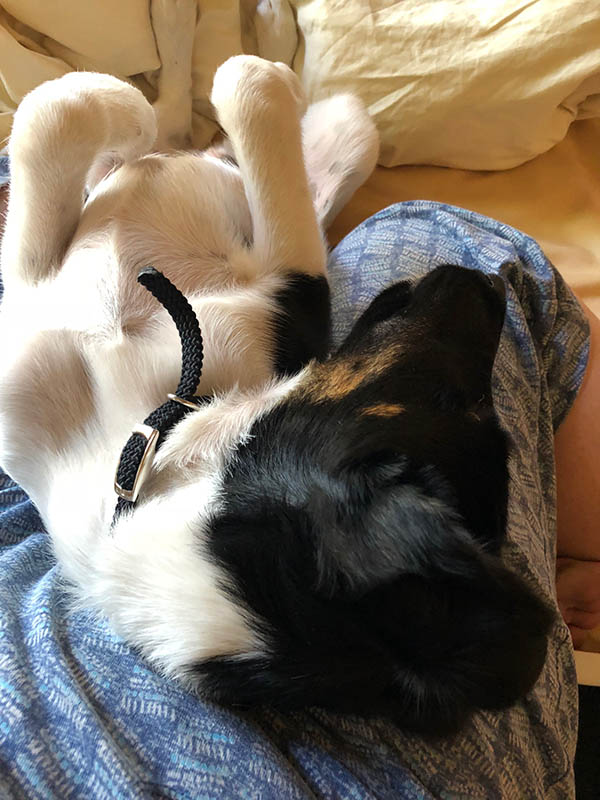 Justin in my lap where he always wants to be.

By this point, I’ve had three different “prepare yourself” lectures from the vet team working on Justin. They claim they deal with dogs with liver toxicity all the time and they can tell who’s going to make it. The fact that they can’t stop Justin’s vomiting and bloody diarrhea is a bad bad sign. Especially worrying is that they can’t get his blood sugar stabilized and his clotting ability is severely compromised and doesn’t seem to be improving. Tonight was the worst lecture yet, where one vet said this is the point where, if Justin were his, he’d decide to let him go. The three vets agreed that Justin is at the stage where, if he were human, he’d be in an operating room getting a liver transplant. They explained that many dogs have high liver numbers from some toxicity, but they’ve never seen one survive with the one, two, three punch of high liver numbers, failing clotting ability and no improvement in blood sugar numbers.

I don’t want him to suffer, but I don’t want to give up hope yet. Although, one vet told me in great detail all the horrible ways this will end if he continues to deteriorate.

Through it all, my online Smooth Fox Terrier community has been fabulous with thoughts, good wishes and great advice. I haven’t been able to take phone calls as I’m not sure I can keep it together. At one point, when they cleared me out of the ICU for a few hours so they could work on patients, I went to the local Indian Casino for a quick bite and a needed drink at the bar. I started crying and had to tell the bartender what was happening. He gave me a big hug and said he’d have some of the Tribal elders chant for Justin. So we have that going for us.

Tomorrow promises to be an even tougher day. Not sure how I’ll make it through. 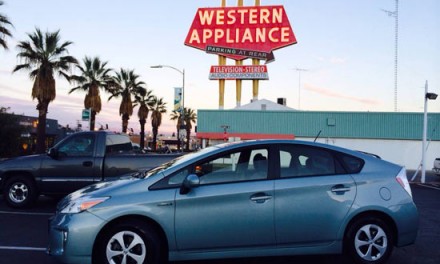