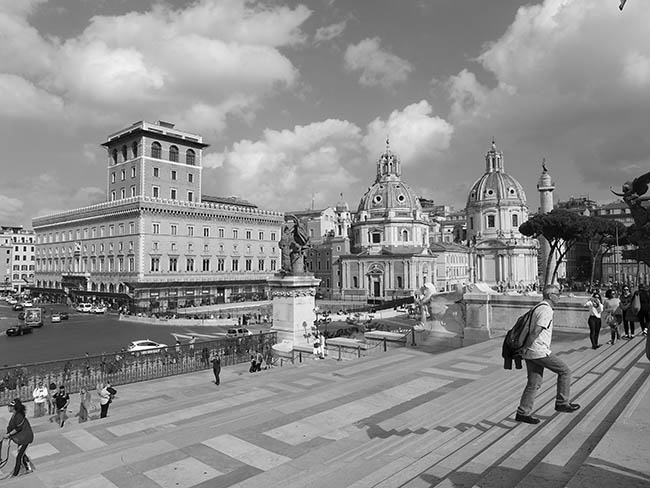 We’re in Rome! It’s a story for another day how we got here, but we are here for a flying one day and a bit visit before heading off to our vacation in Umbria hunting truffles. I don’t know if we are going to be watching pigs or dogs dig up truffles or if we will be sent out with spades to dig them up. But again, another story for another day.

So here we are in Rome, and it could be Andy’s worst nightmare. I brake for every church, museum, historical marker or wide spot in the road where something famous might have happened. Andy is decidedly not a museum goer. Luckily for him, I was an Art History minor. So since my high school days in Europe and through college, I took many, many trips to Rome, most of them involving special access to museum collections. One of my best trips was during a special Holy Year when our Catholic group made a pilgrimage to what seemed like every major church in Rome, culminating in an after hours tour of the Vatican and an audience with the Pope. So you know what I wasn’t going to do? Drag Andy to churches, museums and the Vatican. In fact, one of the few things I have never done in Rome is just wander around the streets and enjoy the ambiance of Rome.

That’s what I decided to do between arriving at 5PM Friday and leaving at 10AM Sunday. I would try to find a Felliniesque Rome and film it in black and white. Let me tell you, in 2018, it’s not easy to find Fellini’s Rome. On my first trip to Rome, back when I was in high school, you couldn’t walk down any street without seeing a Fellini character or two or ten. A priest muttering to himself. An impossibly beautiful girl riding side-saddle behind her cigarette-smoking boyfriend on a Vespa. A flock of nuns hurrying across a piazza casting censorious glances at everyone. Maybe a buxom blonde jumping in a fountain.

In the intervening years, Rome seems to have changed. The people dress more casually, the city is cleaner, the Vespa riders all wear helmets instead of driving with one hand and applying make-up or lighting a cigarette with the other. That sinister Fellini element seems to be gone. I tried to recapture it by vowing to photograph everything in black and white. 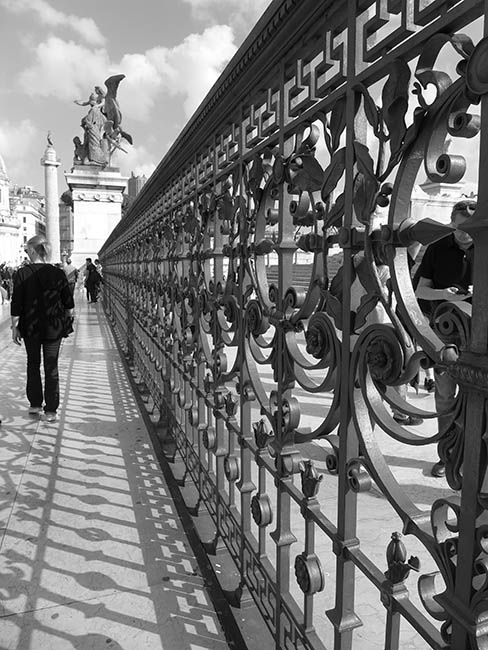 You need a different perspective to look for Fellini’s Roma all these many decades later.

The Spanish Steps and a few other places were filled with too many people in contemporary clothes, so I headed to the monument to Vittorio Emmanuel and the creation of Italy. It’s not ancient — barely Victorian — but it had fewer people and afforded great views from the Palatine Hill. But not a Felliniesque character was to be found. 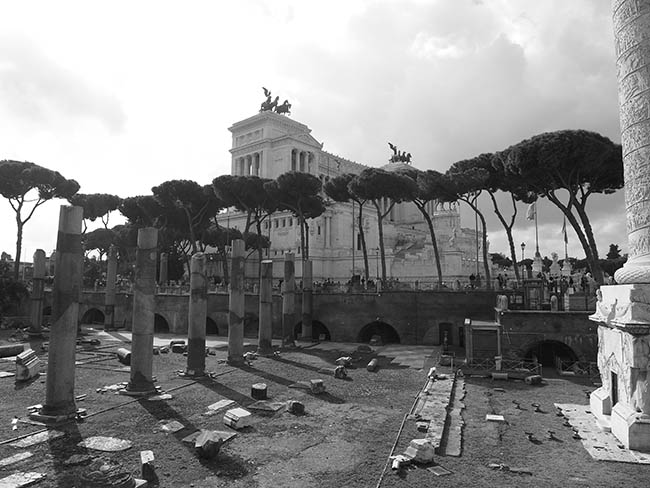 Not even lurking in nearby ruins of the Forum. 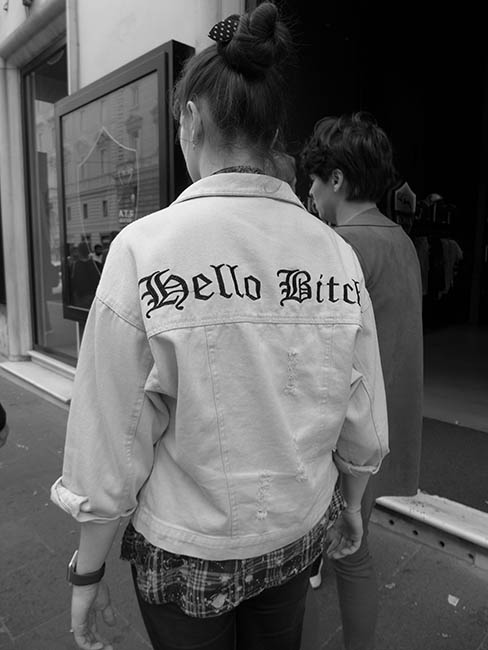 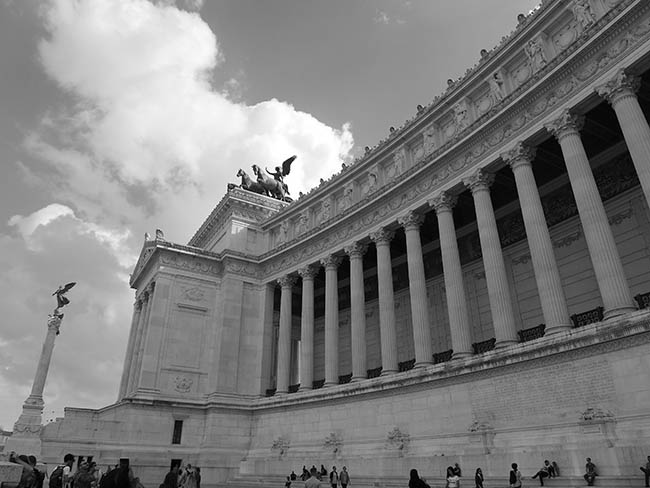 The monument has hundreds of steps which did lend themselves to a somewhat Felliniesque scene.

It seems it’s a thing in Rome to visit a monument, sit down on the steps and take your shoes off. Apparently there are a lot of paid guards whose main duty is to stop this activity. It was an on-going battle. 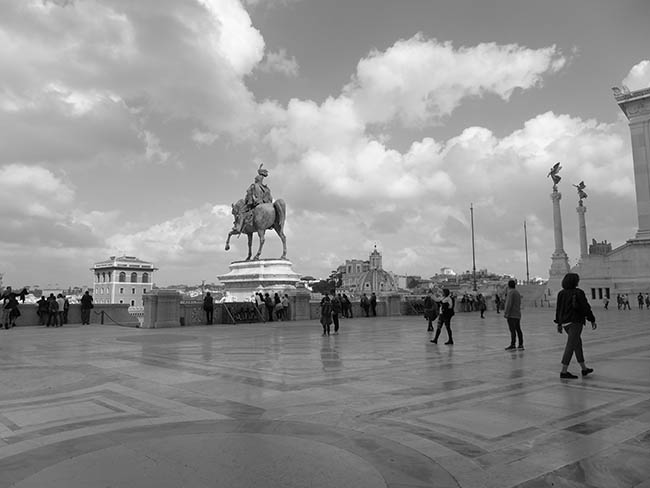 I hung out for a long time waiting for Fellini action, but only managed to get a lot pictures that featured the back end of Vittorio Emmanuel’s horse. 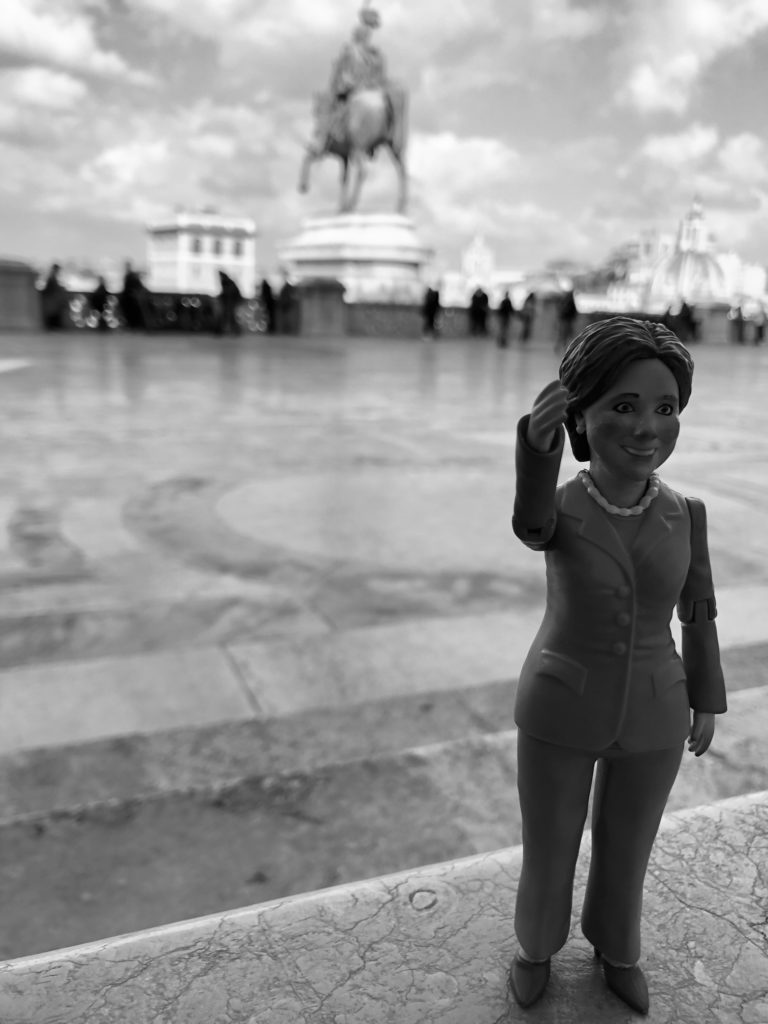 I even got Hillary into the act. She says, “Ciao Bella” by the way. 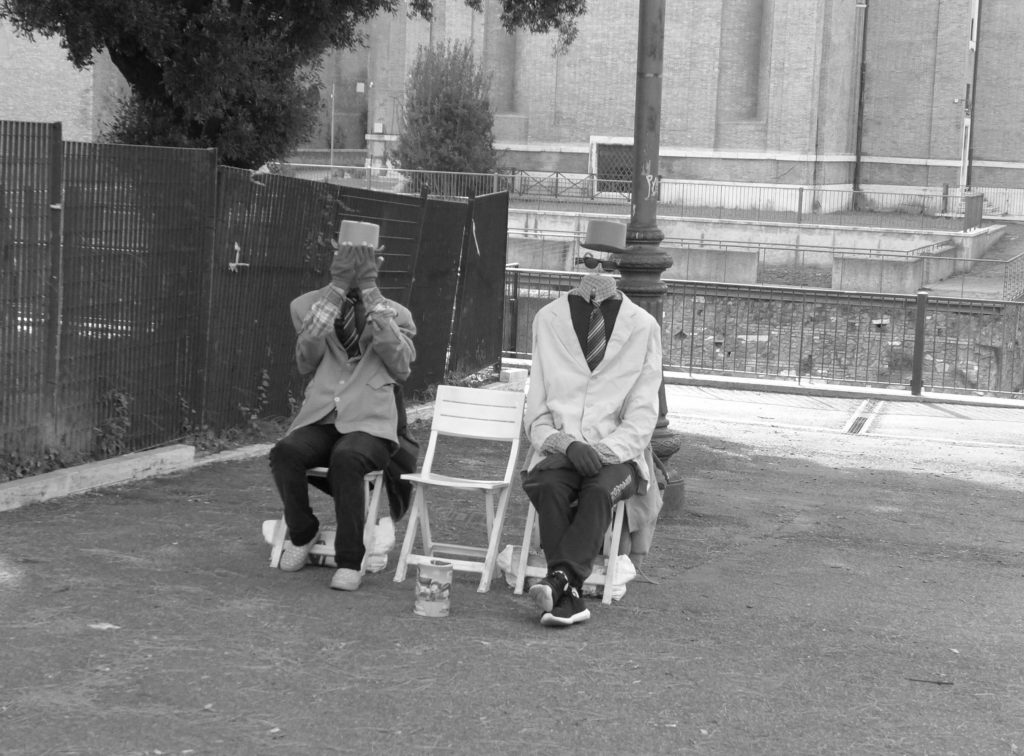 These strange “headless” guys were a little more in the right spirit. Although they weren’t going to let me photograph them without a handful of Euros. 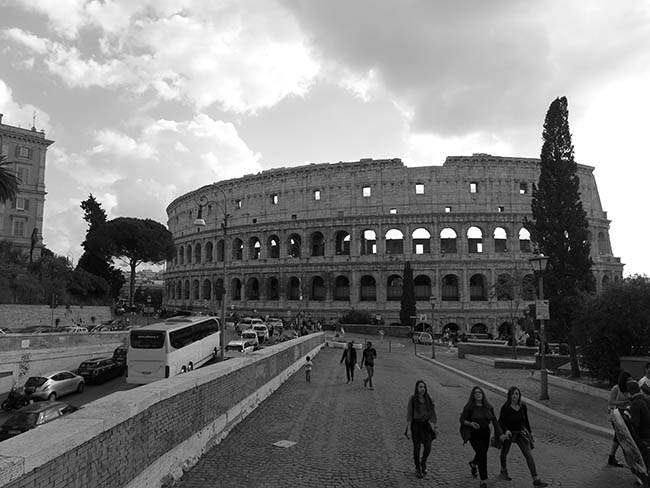 Of course, I had to head to the Coloseum, but it wasn’t any more Felliniesque over there. 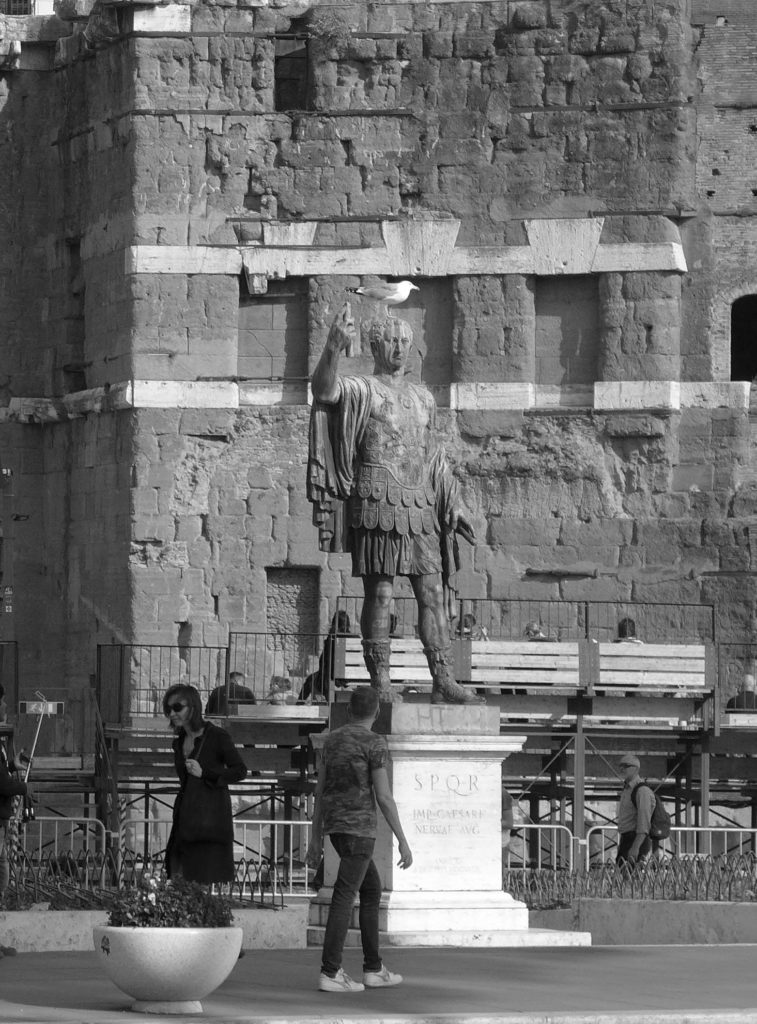 Except for an emperor with a bird on his head, who Fellini would probably say symbolizes the fleeting nature of fame. One day you rule the known civilized world, the next day you are covered in bird shit. 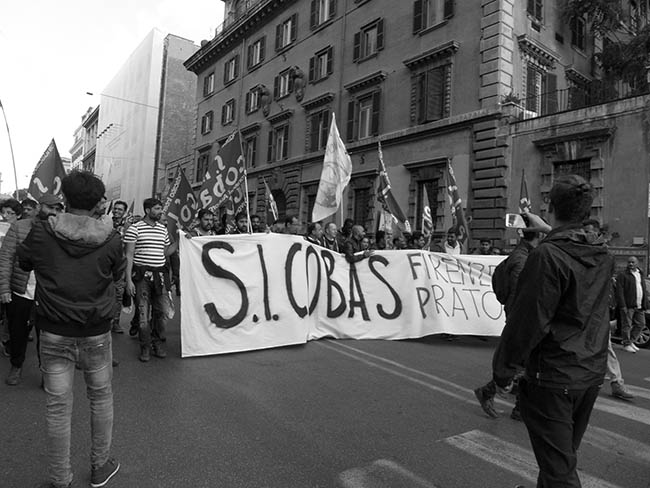 In a final near Fellini moment, I did manage to get caught in a big protest march. Which I think was anti-government, but could have been pro-Palestine. I didn’t stick around to find out once someone started lobbing tear gas.

By this time, I was convinced Fellini’s Rome of La Dolce Vita was long gone. Or if it’s still lurking in some corners of the Eternal City, I didn’t know where to look for it. So I switched my camera back to full color mode, rejoined my party and we embarked on an epic FIVE HOUR dinner at a Michelin starred restaurant. I decided to document it with Hillary as my Vanna White.

We opted for the Tasting Menu, which typically means many courses — each about two spoonfuls each — featuring what is seasonal and the chef’s specialties. In between the regular courses are amuse bouche and bits of this and that the chef just throws in to keep it interesting. Especially since you eventually lose count of the courses or even where you are in the whole thing. So there are a lot courses I missed photographing such as a fish and one of the desserts. 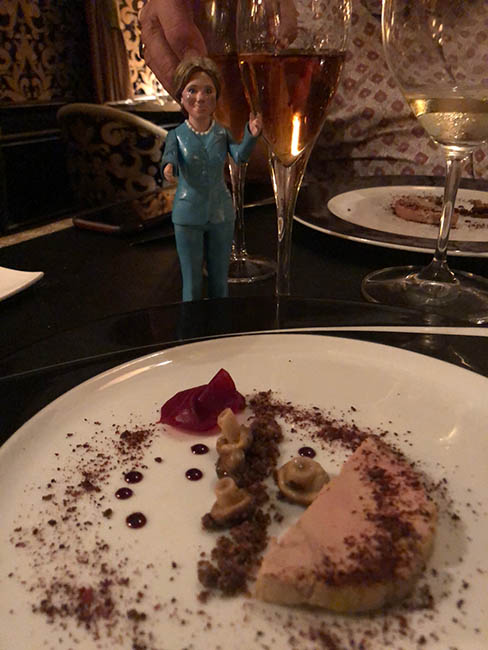 Fairly early into the experience, we hit a high note with the foie gras. 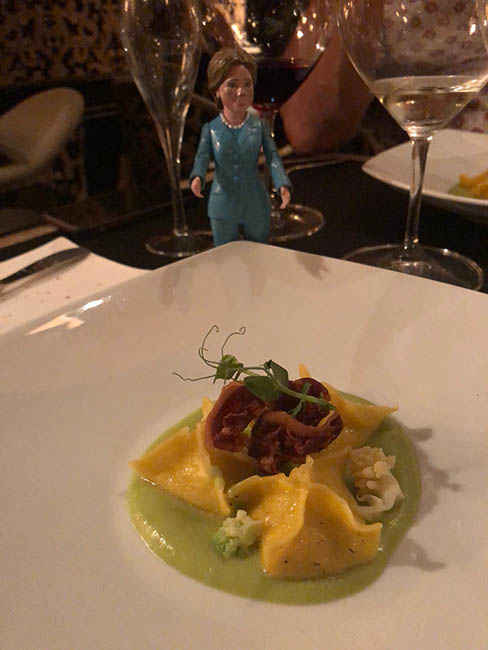 Then an incredible pasta dish with three ravioli thingys artfully arranged on pureed broccoli and topped with bacon. Since I’ve never been one to like a whole bowl of pasta, this was perfect. 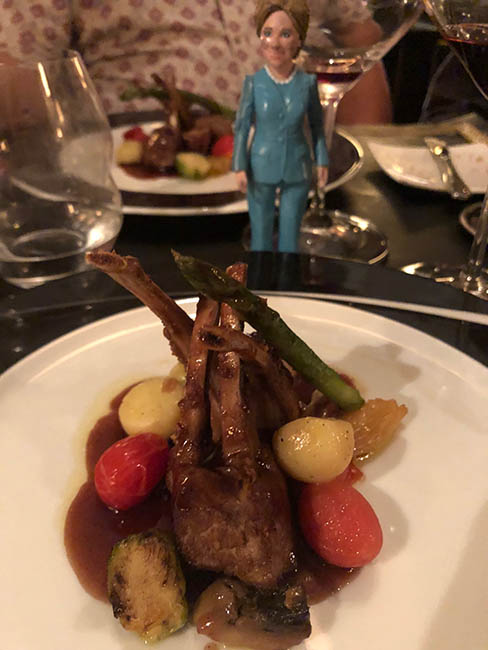 Then a bunch of other stuff. And more wine. And a lamb dish that arrived under glass with the trapped smoke of various herbs.

In my mind, this is where a lot of chefs slip up on a tasting menu. They serve an almost normal sized entree. I’ve only been to one restaurant that wisely stuck to the two spoonfuls rule all the way through. Because by this time we were in a certified food coma, but who knows how many desserts and goodies they were still going to feed us. 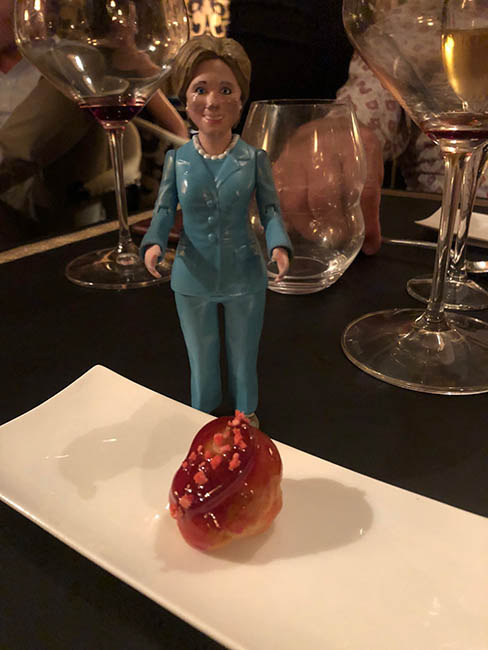 A nice little puff of pastry covered with caramel glaze was perfect.

I was spared, as someone who is lactose intolerant, from the rest of the desserty things which had milk and cream in them. It was probably the only thing that allowed me to remain ambulatory by the end of the meal which came shortly before midnight.

It was at this point, even though I’d switched my Roman lens to color from black and white, and even though I hadn’t seen a sinister nun crossing a plaza or a buxom woman jumping in a fountain, that I realized we had just lived a five hour slice of Fellini’s La Dolce Vita.

P.S. — And guess what Andy did while I was photographing Rome and NOT dragging him to museums, churches and historical sites? He went on a five hour tour of the Vatican and the Coloseum WHICH HE LOVED! 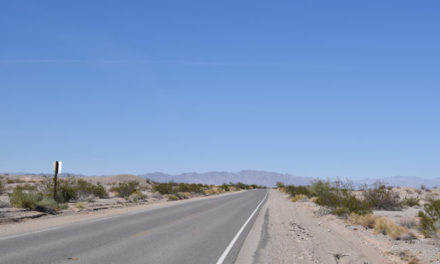