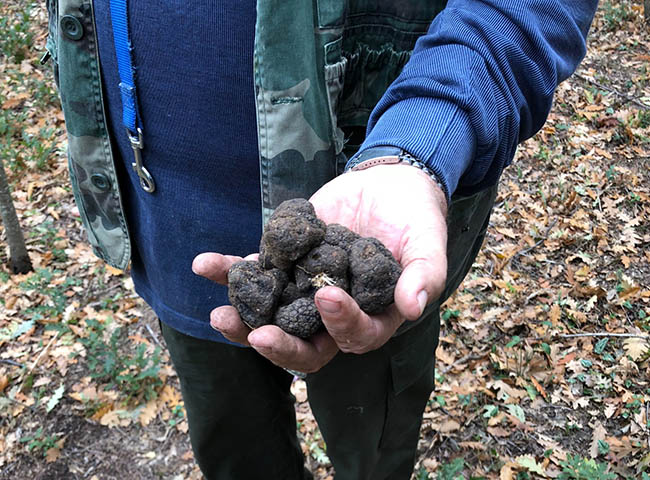 I will have to preface this story sadly by saying that, after the tragedy of losing my little Justin to a Death Cap mushroom, the thought of watching a dog hunt for fungus under oak trees was more than a little unnerving. But truffle hunting was the centerpiece of the vacation. So off we went with one of Italy’s premier truffle providers who also arrange these experiences. We’ve been taking full advantage of their hospitality, staying at their villa and receiving excellent trip planning advice from them. To add to the excitement, we were told our truffle hunting experience would be the same one they had orchestrated for possibly the most famous woman in the world who is not the Queen of England. Quickly we realized that we didn’t need the caché of magic celebrity dust from She Who Shall Not Be Named to make this a transcendent experience. However, like most great travel experiences, we ended up having some of our preconceptions exploded, or rather replaced with better narratives.

The first misconception: we had been sure that truffles were so hard to find that we would be slogging through secret dark forests in the hopes of finding, maybe one truffle — much akin to most of the fishing trips I’ve been on. Instead, Umbria is apparently positively awash in truffles. We could actually have walked down the hill from the villa where we were staying and practically tripped every five steps over truffles. We probably could have smelled the truffles in the air if our noses had been just a little more acute. 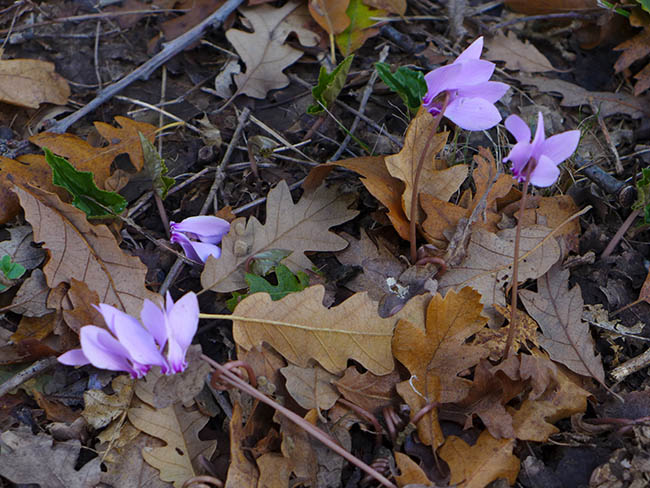 While we waited for the truffle hound, I had time to observe that Umbrian oak forests have a Dodecatheon very similar to one of my favorite California native flowers: Henderson’s Shooting Star? (Sorry for that digression.)

Our second misconception: Who exactly does the truffle hunting? I had done some research and traditionally, both dogs and pigs have been used. I was praying “Please, please, not a pig.” Sorry, I just don’t like pigs. Luckily, we had a dog, and you know, if you visit this blog, that I’m all about the dogs.

If you do some Googling and Internet research, the dog that seems to get the most credit for truffle hunting is the Lagotto Romagnolo, which, if you do even deeper research, you’ll find was, until very recent decades, more used for retrieval in duck hunting. It turns out many scent dogs or mixes of scent dogs are employed. I suspect, when truffle hunters meet, the best breed or mix of dog is a hotly contested subject, with fierce loyalties to different breeds, and professionals touting their preferred dog as a competitive advantage. Our dog master told us through a translator that he prefers a mix of dogs known to have particularly sensitive noses and excellent retrieving skills. His truffle hunting companion, Diana, is part Springer Spaniel and part Bretagne Spaniel. He also said she was like a wife. I’m not sure if that meant that she was well-trained or that she had trained him well. From watching the two of them, I’d say the latter. I should note that Diana works for Mortadella, so she carries the truffles back with a very soft mouth to ensure she gets her full serving.

Not that I’d want my terriers anywhere near any kind of mushroom, but I couldn’t help noticing that they are just as good in their way at similar kinds of job. Smooth Fox Terriers, of course, hunt by sight and noise, having surprisingly ineffective noses for dogs. But once I’d trained my dogs that “leave it” got them a treat, they quickly learned to grab things, bring them to me for a “leave it” command and their treats. Instead of truffles, I’m usually brought rocks, small dead rodents and pieces of deer carcass left over from the Mountain Lion’s kills. In fact, my late little Oscar learned that, if he found a carcass, he should bring it to me piecemeal for maximum rewards. Maybe if I upgrade from dog biscuits to Mortadella, I’ll get something better. 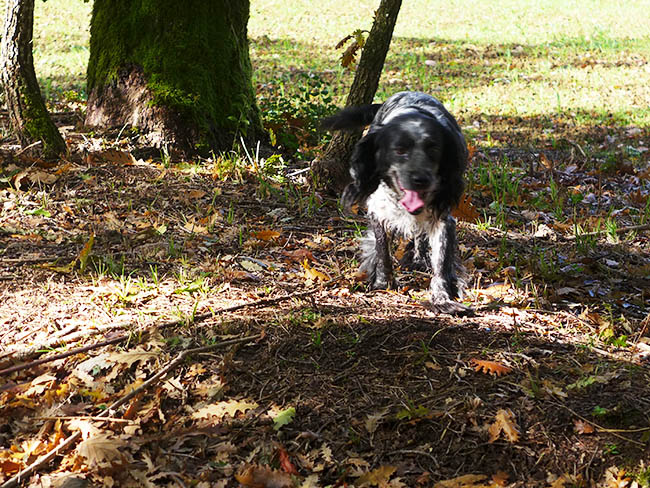 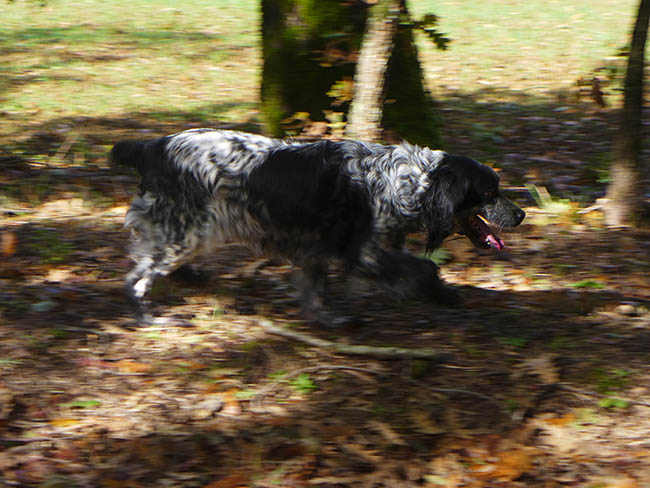 She’s on the scent and off running. 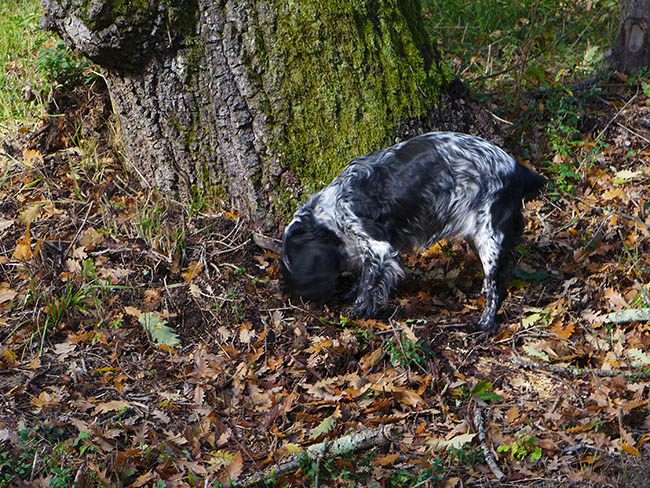 Jackpot! And a quick dig to expose the truffle. 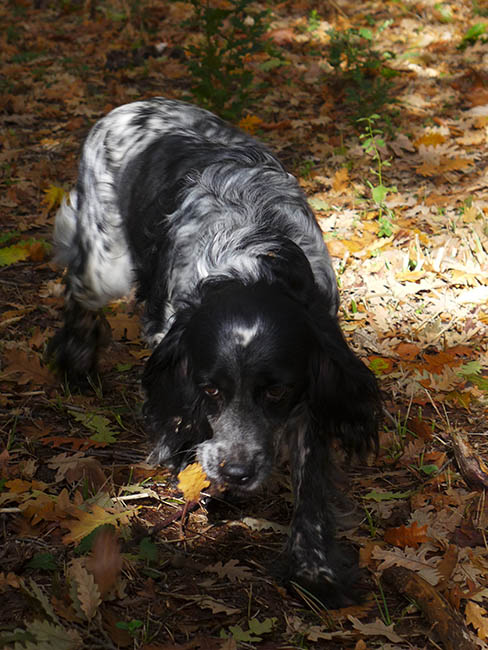 And she brings back a truffle –and a yellow oak leaf — with an incredibly soft mouth that leaves no dent in the fungus. 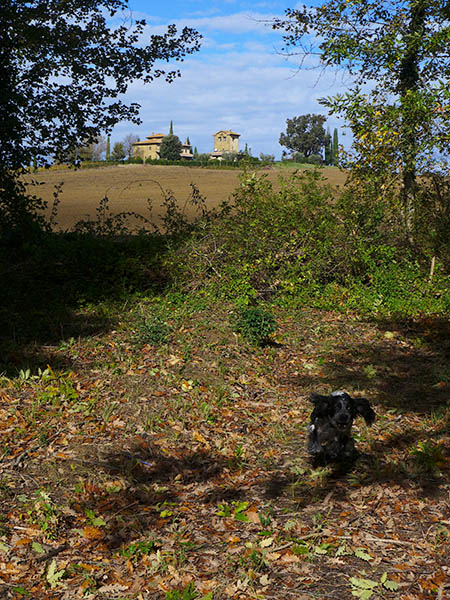 Did I mention we probably could have smelled the truffles from the villa?

But back to truffle hunting. Obviously, since Diana the Dog did all the work, we didn’t take all her truffles. We waited until we were ushered into the company’s show room where we discovered that sprinkling truffles on pasta is just the tip of the truffled iceberg. In addition to a wide variety of rare and raw truffles, there were truffle salts, truffled maple syrup, even a full line of truffle-infused skin care. I washed my hands in the rest room with truffle hand soap and pondered the pros and cons of smelling like truffles. But then, I’m someone who sought out London’s most famed perfumer because they had a scent based on the botanicals in gin. So I clearly have no trouble smelling like foodstuff.

Part of our master plan had been to secure enough truffles to cook ourselves into a truffle coma back at the villa. Here’s where the most important misconception we held was exploded. We described to the helpful staff how we were going to “cook” the truffles. In very polite Italian fashion, they moved quickly to save us from ourselves — or at least from ruining a premier truffle. They sent a wonderful cook to the villa who instructed us that, in short, you don’t cook truffles. You warm up butter — lots of butter — then drop grated truffles into that butter shortly before you dress the pasta with it. Then you shave more truffles on top. There is only one real hard and fast rule: you can’t have too many truffles.

Not that we were fasting before our truffle extravaganza. As we left the truffle showroom, our hostess directed us to a tiny trattoria in a little Romanesque hill town that we never would have found otherwise. Their specialty was a flat bread cooked in embers. 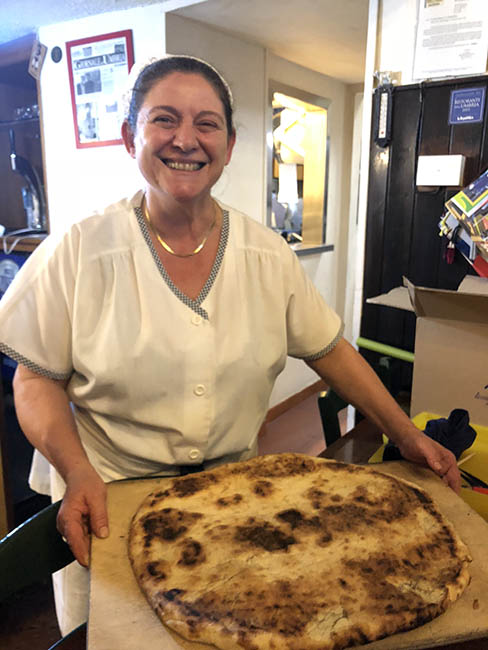 We filled our bread with a variety of local meats, cheeses and vegetables to make a kind of calzone. 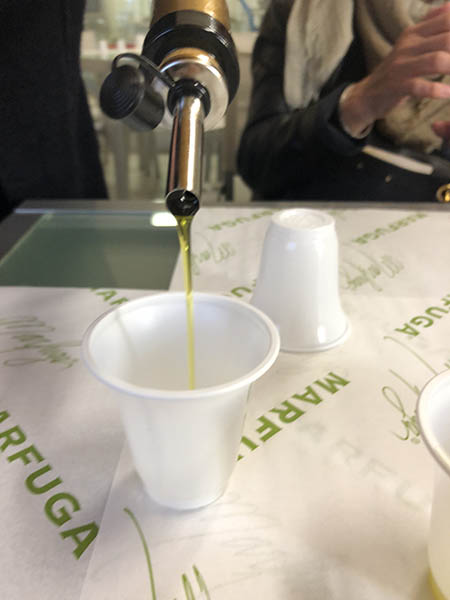 And there was also an olive oil tasting at Marfuga. (Hint: you can buy their oil at Williams Sonoma.) 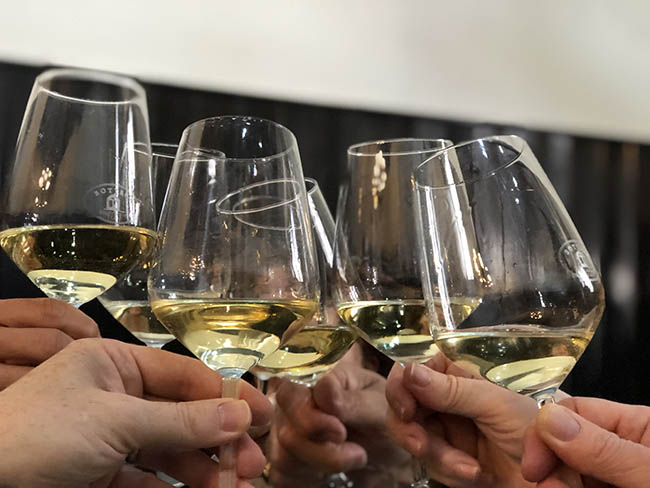 All in all, a wildly successful Umbrian day. 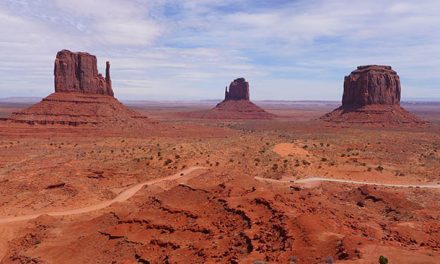