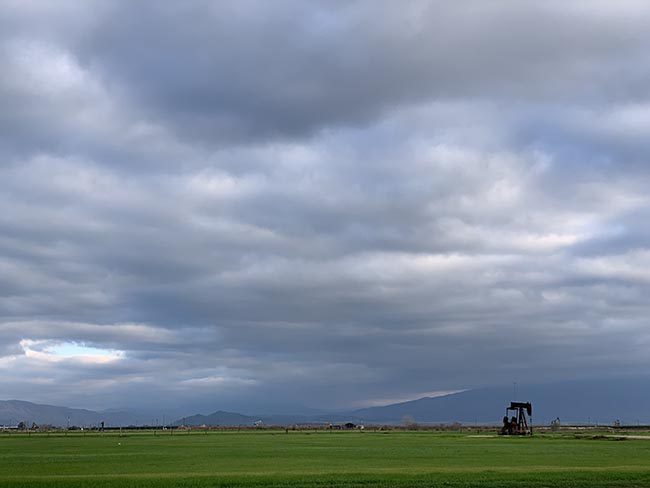 The thing about roadtripping east from California, there are only so many ways you can get out of the state. Most of them involve driving over a mountain pass, through a desert or both. In the winter, it’s even more difficult as a lot of the mountain passes are closed or scary to drive in an RV. In fact, I have a rule: only one mountain pass per day. Of course, avoiding mountains to go Southeast also involves hitting LA’s sprawl, which is also something I’m hesitant to do. Although, the 210 and I have a friendly understanding. The last two times I found myself in an RV going through LA, I gritted my teeth and headed for the 210, simply because it hugs the foothills, so it really only has traffic feeding in from one side. Imagine my surprise when it was almost empty. Apparently there was a traffic warning about some sort of hold up or construction (Angelenos are very tuned in to traffic warnings.) But I didn’t get the memo, so it was just me and Buffalo Soldier speeding along almost alone on six lanes of highway.

However most of the time, certainly in late fall through early spring, I route myself over the Tehachapi Pass. It’s not the scariest mountain pass I’ve been on, but it’s heavily traveled by trucks, so the least little hint of snow or ice makes it a place I’d rather not be. Now to get to Tehachapi from the Bay Area presents another challenge: driving down the empty expanse of I-5 through the Central Valley. Of course, the Valley is the vegetable garden of America, but you won’t see that from the freeway. I-5 is several lanes of freeway ingeniously routed to hit absolutely NO towns or cities. As you speed down, most of the sights consist of rolling cattle pastures, some almond groves, truck stops, oil pumps and about a million tumbleweeds. The most impressive sight is the California Aqueduct taking all our Northern California water down south so heavily irrigated crops can grow where they have no business growing.

But I try to stay positive and I’m always looking for interesting roadside attractions. There are a surprising number of them, including strange oddities that I can’t seem to find explained by Professor Google. The problem is, there are no places to stop and take pictures, so bear with my descriptions. And if you have answers to my questions, please let me know.

The first oddity, just after the San Luis Reservoir is what appears to be a field of planted prickly pear cactuses. I say planted because there are hundreds of them but all in one long wide strip alongside a cattle fence. I can’t believe in all of the Central Valley only this one place naturally supports prickly pear cactus. Yet this crop doesn’t seem to be connected to any discernible farm. It’s just there. Who planted it? Why? I-5 roadtrippers want to know.

The next thing that gets me thinking are the many tumbleweeds. The proper name is Russian Thistle and, despite entering the Western mythology, they are actually a nasty invasive species. They are nothing to dismiss. I see massive piles of them that have clearly been piled up by farmers desperately trying to keep them out of orchards. On one trip down I-5, I pulled off the road and encountered a tumbleweed larger than the Prius I was driving. Who brought them over here? Did someone think they were a good idea? Can we ever get rid of them? What Native species do they crowd out.

The big sight on I-5, if you are coming from the North, is the Harris Ranch compound, which you will know is just ahead when you start smelling the feedlots. The Harris Family seems to have their hand in everything: cattle, produce, racehorses, a restaurant/hotel/convention center complex which boasts several restaurants, gas stations and even a bank of Tesla charging stations. I always try to stop and patronize them, not just for their excellent breakfasts and steaks, but because they generously let RVers camp overnight in their parking lot. Several times I’ve taken advantage of that hospitality.

A lesser known point of interest is nearby Los Gatos Canyon, site of a horrific airplane accident that killed dozens of migrant workers who were being deported. Woody Guthrie was so incensed that the newspapers didn’t even name the victims that he wrote the song “Deportees” to call attention to the debt we owe to Mexican farm workers and how little we give back to them for their hard work. I’m told the crash site is surrounded by private land now and can’t be visited. So I cue up Woody’s song and nod respectfully in that direction.

A few more hours gets you to Bakersfield, which is either growing rapidly or falling apart. I’ve never been through there when most of the roads in and out haven’t been under heavy construction. Bakersfield is no one’s idea of a garden spot, but it did give us Buck Owens and Merle Haggard, so respect for that.

Out of Bakersfield, you head over the Tehachapi Pass and come down into the Mojave Desert. This is hallowed ground — or airspace — for fans of the The Right Stuff. Nearby Edwards Air Force Base is where Chuck Yeager took his test flights and the Apollo astronauts trained. I think it must also be near where Jack Parsons, the strange but brilliant father of jet propulsion, used to come out to the desert to launch rockets and summon Satan with Aleistair Crowley. I’d like to see some historical plaques commemorating THOSE sites.

Not too far past Edwards, you get into Joshua Tree country. You’ll pass mile after mile of these strange yuccas. I’ve detailed before how the Joshua Tree was once dependent on the extinct Giant Sloth to eat its fruit and spread its seeds. Sadly, when the Giant Sloths died, there was nothing left that was strong enough to distribute Joshua Tree seeds. So now they sprout where the seeds fall and nowhere else. A question for the scientific community: can’t you do a Jurassic Park clone job on the Giant Sloth? How amazing would it be to drive the high desert and see a Giant Sloth ambling along spreading Joshua Tree seeds hither and yon. Since we’ve driven out all the Grizzly Bears that feature on our state flag, I’d suggest we replace it with the Giant Sloth.

After Barstow, I decided to take a two lane blacktop detour and headed down CA-247 toward the Lucerne Valley and Yucca Valley. I’m still puzzling over the bizarrely named Lucerne Valley. This is dry desert, although there is a long dead dry lake. Who decided to name it after Switzerland’s famous Lake Lucerne. Did some early pioneer of Swiss descent get up on a high mountain pass, look down at the dry lake and mistake a mirage for actual water? Apparently, there is a group petitioning for CA-247 to be named a scenic route. They’ve put together a slide presentation making their case, but they offer no answer to the naming.

Finally, I pulled into Yucca Valley where a Facebook friend agreed to meet me for a late lunch and nicely treated me to sushi in the desert. Surprisingly delicious. That left me on a rush to make the long traverse through the entire length of Joshua Tree National Park to my campsite before sundown made it impossible to set up camp. Luckily I made it in time to see the afternoon sun on the Pinto Basin, which is named, not for the bean, but because “pinto” means painted. You can’t appreciate the name until you see the late day sun reflecting gold and red on the hills and sand.

And that’s my thumbnail guide to the road from the Bay Area to the High Desert. Someday I’ll write a guidebook covering all the bizarre roadside attractions on the way. That is if California will add some pull outs on the route so I can get some pictures.

Tomorrow, on to Arizona!

And, in case you’ve never heard it, here is Deportees as sung by Woody’s son, Arlo.